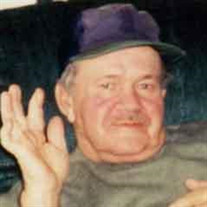 Max L. Messer, Sr. Max L. Messer, Sr., 79, of Bristol, Virginia passed away Saturday, May 14, 2016 at NHC Healthcare of Bristol following an extended illness. He was born in Wise, VA on December 9, 1936, a son of the late William Adrian Messer, Sr., and Virgie Naomi Garrison Messer. In addition to his parents, he was preceded in death by his brothers and sisters, Bill Messer Jr., Ruth Messer Payne, Wilma Jean Johnson, Jim Messer, Bob Messer, Barbara Ann Smith, Mary Jane Springston, Carolyn Faye Hartburger, and Sandra K. Messer. He was a resident of Bristol and was a veteran having served in the US Army. He was a member of Holy Church of Truth and was a retired coal miner. He enjoyed fishing, hunting and gardening. Max was a loving and a devoted husband, father, grandfather, brother and uncle. Max is survived by his loving wife of 59 years, June Messer, of Bristol, VA; a daughter, Faith Mabe and her husband Jeffrey of Abingdon, VA; two sons, Max L. Messer, Jr. and his wife Robin of Kingston, RI, and Samuel Messer and his wife Connie of Bristol, TN; six grandchildren, Amanda Hales and her husband Matt of Bristol, TN, Katie Messer of Providence, RI, Autumn and Chelsea Messer of Bristol,TN, Abigail and Eli Messer of Kingston, RI; and Chris Koserski who was like a grandson; a great-granddaughter, Lily Foltz; a special nephew, Donnie Lane; two devoted friends, Peter and Bridgette Koserski; a sister, Brenda Hobbs and her husband Doug of Hopewell, VA; two brothers, Ted Messer and his wife Glenna of Big Stone Gap, VA, and Joe Messer and his wife Debbie of Charleston, WV. A graveside service for Max will be held at 11:00AM on Wednesday, May 18, 2016 at Mt. View Cemetery, 1019 E. Valley Drive, Bristol, VA with Pastor Leonard Lane officiating. Everyone is asked to meet at the cemetery at 10:45AM.

The family of Max L Messer, Sr. created this Life Tributes page to make it easy to share your memories.

Send flowers to the Messer family.