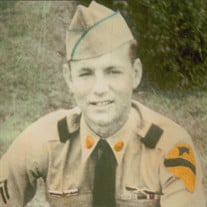 Morris Carlton "Curly" Blevins, 90, of Sweetwater, TN passed away Monday, November 5, 2018 at Sweetwater Hospital Association. He was born in Shady Valley, TN on April 30, 1928, a son of the late Pierce and Rheda Manuel Blevins. He was a native of Bristol, TN but was born and raised in Shady Valley, TN and was of the Baptist faith. He attended Johnson County High School where he graduated with honors while excelling in football, baseball, and track. After graduation he was signed by the Chicago Cubs baseball team to play for the Minor League, but soon after he was drafted into the Korean War where he served from 1951 until 1952 with the First Calvary Division and the Fifth Infantry Regiment and overcame incredible odds while surrounded on the battlefield. Upon returning from Korea he served with the 101st Airborne Division (Screaming Eagles). Mr. Blevins was awarded several medals for service to include the Korean War Service Medal, the Combat Infantry Badge, two Bronze Battle Campaign Stars, the Army Occupation Medal, the United Nations Medal, the ROK Korean War Service Medal, the Expert Rifle Medal, the Expert Pistol Medal , and the Korean Citation Medal which was presented by Sigum Rhe, president of South Korea. After being discharged from the Army, Mr. Blevins returned to baseball were he played semi-pro baseball for 20 years. Mr. Blevins was an avid hunter and especially enjoyed squirrel hunting. Mr. Blevins worked for several companies to include Tennessee Dept of Road Engineers, Norfolk Western Railroad as a Brakeman, the Singer Sewing Machine Company, the People's Life Insurance Company, the Sears-Roebuck Company, the J.C. Penney Company, the Huff Cook Insurance Company, General Motors Corporation, and General Electric Company from which he retired. All services will be private. The Committal and Entombment was held at Mountain View Cemetery.

Morris Carlton "Curly" Blevins, 90, of Sweetwater, TN passed away Monday, November 5, 2018 at Sweetwater Hospital Association. He was born in Shady Valley, TN on April 30, 1928, a son of the late Pierce and Rheda Manuel Blevins. He was a... View Obituary & Service Information

The family of Morris Carlton "Curly" Blevins created this Life Tributes page to make it easy to share your memories.