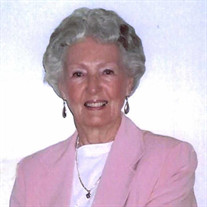 Nancy Elizabeth Hornsby Hickie, age 98, much loved wife, mother, grandmother, great-grandmother and friend passed away on August 31, 2021 at Oakmont at Gordon Park in Bristol, Virginia She was born the first child of Mary and Joseph Hornsby of Chapleau , Ontario. As her father was a station manager with the Canadian Pacific Railroad, she lived in several areas of northern Ontario. After teachers college, she attended and received a degree from the University of Toronto. She then taught for two years in the backwoods of Northern Ontario. During her time in Canada Nancy worked for CKSO, radio station in Sudbury, Ontario and CKEY in Toronto. Securing the job of her dreams, Nancy was employed by Air Canada Office as a reservationist where she worked in the Royal York Hotel in Toronto. At this time she also did volunteer work with a troupe show for service men going overseas as the co-master of ceremonies. Nancy met Patrick William Hickie, Sr. when he was training with the Royal Canadian Air Force. They married on June 8, 1946 at St. Michaels’s Cathedral in Toronto. Canada and moved to Bristol, Virginia shortly thereafter. On December 22, 1952 she proudly became a United States citizen. Nancy was very active in the Bristol community serving in many organizations. She was the Story Lady for WOPI and also served as the story lady at the new library when it opened. For many years she was a member of the Bristol Study Club. She was involved in two garden clubs, the Tennessee Garden Club and the Hill and Dale Garden Club. During her many years as a member of the Music Club, she served as a Vice President and then as a Co-Chairperson for the annual luncheon committee. Nancy’ s involvement in the YWCA of Bristol was quite extensive. She served as President of the Y and also as the Program Chairman while on the staff. She chaired the World Fellowship Committee which put on the annual World Ethnic Craft Fair. She was quite involved with the formation of the Child Day Care Program. After her volunteer work at the YW, she was employed there as the YW Program Chairman. She assisted with the YW which sponsored Y Teen Clubs in high schools. They provided classes for teenagers to work in nursing homes. She was preceded in death by her parents, Mary and Joseph Hornsby, her sisters Joyce Hornsby and Marilyn Graff, and her husband, Patrick William Hickie, Sr. She is survived by her four sons and a daughter: Pat Hickie and wife Kathy, Shelagh Hickie and husband John Abel all of Bristol, Michael Hickie and wife Hunter Dossett-Hickie of Johnson City, Kevin Hickie and wife Katherine Walker of Springdale, Arkansas, and Brian Hickie and wife Lynn of Hendersonville, TN; seven grandchildren: Patrick Hickie and wife Maggie of Boise, ID, Damien Abel and wife Lauren of Atlanta, Chris Hickie of Johnson City, TN, Jaime Kresse of husband Andrew of New York City, Mark Hickie and wife Elia of Washington, DC, Sarah Delia and husband Ben of Lancaster, PA, and Michael Hickie of Johnson City and niece Jennifer Graff of North Bay, Ontario Canada. She is also survived by 9 great-grandchildren: Madison Abel, Elizabeth Hickie, William Hickie, Benjamin Hickie, Connor Hickie, Claire Hickie, and Miles Kresse and Jamison and Scotland Kresse. Donations may be made to the Bristol Young Women’s Christian Association (YWCA) or to various animal shelters in the area. The service for Nancy Hickie will be a private family internment.

Nancy Elizabeth Hornsby Hickie, age 98, much loved wife, mother, grandmother, great-grandmother and friend passed away on August 31, 2021 at Oakmont at Gordon Park in Bristol, Virginia She was born the first child of Mary and Joseph Hornsby... View Obituary & Service Information

The family of Nancy Elizabeth Hornsby Hickie created this Life Tributes page to make it easy to share your memories.

Send flowers to the Hickie family.