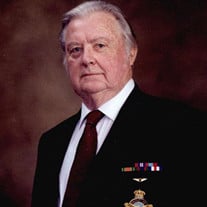 Patrick William Hickie, Sr. age 90, passed away peacefully at his home on Wednesday, March 11, 2015. He was born June 25, 1924, the third child of Patrick William Hickie and Kathleen Kevins Hickie, both of County Cork, Ireland. As a young child he lived in Quetta, India (now Pakistan) as his father was a teacher with the English army. At his father’s death, he returned to South Croydon, England. At the age of sixteen he came to Bristol, Virginia to live with his great uncle, Monsignor James Joseph Hickie. He attended and graduated from Virginia High School where he served on the debate team, was President of the Civitan Club, and was the Editor-in-Chief of the school yearbook, the Virginian. At Virginia High he was selected as the Best All Around Boy. Upon graduation, Pat enlisted in the Canadian Royal Air Force. Flying Officer Patrick William Hickie served as a wireless officer operator flying the Halifax and Lancaster heavy bombers during night operations over Europe. He completed over 30 missions and earned the Royal Canadian Air Force Operational Badge. After the war he married Nancy Elizabeth Hornsby on June 8, 1946 at St. Michaels’s Cathedral in Toronto, Canada and returned to Bristol to work with Boswell Insurance and later Sperry Univac. On December 22, 1952, at the age of twenty-eight he became a United States citizen. He retired from the Raytheon Company as the Department Head of Personnel and Industrial Relations. Pat Sr. was active in the Bristol Jaycees, the United Way, The Toastmasters Club and the Boy Scouts. He was instrumental in the forming of Sea Explorer Ship 212, a Boy Scout Explorer post sponsored by Raytheon. He was also a member of Woodworkers and enjoyed making furniture and other items for his family. Pat had obtained a private pilot’s license and enjoyed flying for many years. He also thoroughly enjoyed fishing, boating, and the family camping trips. He is survived by his wife of sixty eight years, Nancy Hornsby Hickie; four sons and a daughter, Pat Hickie and his wife Kathy of Bristol, Shelagh Hickie and husband, John Abel of Bristol, Mike Hickie and wife Hunter Dossett-Hickie of Johnson City, Kevin Hickie of Springdale, AR, Brian Hickie and wife Lynn of Hendersonville, TN; seven grandchildren: Patrick Hickie and wife Maggie of Boise, ID, Chris Hickie of Johnson City, Mark Hickie and wife Elia of Rio de Janeiro, Brazil, Damien Abel and wife Lauren of Atlanta, Jaimie Kresse and husband Andrew of New York City, Sarah Hickie of Wilmington, DE, and Michael Hickie of New York City; and three great grandchildren: Madison Abel of Atlanta, and Elizabeth Hickie and William Hickie of Rio de Janeiro, Brazil; one sister Moira Crouch of Bedford, England; and several nieces and nephews in England and Canada. A Funeral Mass for Mr. Hickie will be held at St. Anne Catholic Church on Saturday, March 14, 2015 at 11:00am with Father Anthony Senyah presiding. The family will receive friends at 10:00 am at St. Anne Church prior to the service. Burial will follow the service at Glenwood Cemetery.

Patrick William Hickie, Sr. age 90, passed away peacefully at his home on Wednesday, March 11, 2015. He was born June 25, 1924, the third child of Patrick William Hickie and Kathleen Kevins Hickie, both of County Cork, Ireland. As a young child... View Obituary & Service Information

The family of Patrick William Hickie Sr. created this Life Tributes page to make it easy to share your memories.

Send flowers to the Hickie family.