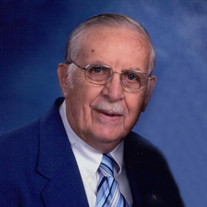 Paul Eugene Thomas, 85, of Bristol, VA passed away on Saturday, April 20, 2019 at Oakmont at Gordon Park in Bristol, VA. He was born on January 1, 1934, a son of the late Albert and Amanda Thomas. In addition to his parents, he was preceded in death by two sisters and three brothers. Paul was a veteran of the U.S. Army during the Korean War. He was a member of the D.A.V. Chapter 40 where he served as chaplain for 30 years. He had worked from Paty Lumber Company and retired from Lowes. He enjoyed going to church, singing in the choir, and reading his bible. He loved working in his woodworking shop, traveling, and liked to draw. Paul was an active member of Fellowship Chapel where he was a former Berean Sunday school class teacher. He is survived by his loving wife of 28 years, Mary Thomas; one daughter, Kathy Pullon and her husband, Joe, of Bristol, VA; one step-son, John Smithson and his wife, Lana, of Gray, TN; four grandchildren, Joseph Wayne Pullon, Michael Pullon and his wife, April, Jessica Boyd and her husband, Terry, and Alicia Anderson and her husband, Caleb; 11 great grandchildren, and several nieces and nephews. The family would like to extend a special thanks to all the staff at Oakmont at Gordon Park for all their loving care. The family will receive friends from 6:00 until 8:00 p.m. Tuesday, April 23, 2019 at Blevins Funeral & Cremation Services. The funeral service will be conducted at 11:00 AM Wednesday, April 24, 2019, at Fellowship Chapel with Pastor Scott Price and Pastor Bryan Hall officiating. The Committal service and interment will follow at Shipley Cemetery, Bristol, TN with military graveside rites conducted by the Army National Guard and the D.A.V. Chapter 40. Pallbearers will be Michael Pullon, Scott Slauder, Frank Boardwine, Jerry Witt, Larry King, Noah Bowman, and Jerry Vincell. Honorary Pallbearers will be Bob Saddler, Kermit Johnson, and members of his Sunday school class at Fellowship Chapel. In lieu of flowers, the family is requesting that donations be made out to the D.A.V. Chapter 40 or to the Alzheimer's Association.

Paul Eugene Thomas, 85, of Bristol, VA passed away on Saturday, April 20, 2019 at Oakmont at Gordon Park in Bristol, VA. He was born on January 1, 1934, a son of the late Albert and Amanda Thomas. In addition to his parents, he was preceded... View Obituary & Service Information

The family of Paul Eugene Thomas created this Life Tributes page to make it easy to share your memories.

Paul Eugene Thomas, 85, of Bristol, VA passed away on Saturday,...

Send flowers to the Thomas family.