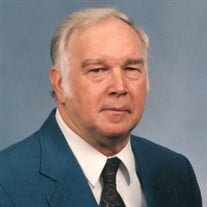 Reverend Glen Murray, 82, of Bristol, TN went to be with the Lord on Sunday, June 16, 2019. He was born in Bristol, TN on August 3, 1936, a son of the late James and Lillie Snader Murray. In addition to his parents, he was preceded in death by a son, Thomas G. Murray; son-in-law, Bill Murray; brother, James Abner Murray, Jr.; and three sisters, Juanita Murray Wyatt, Irene Murray, and Lula Murray Smith. He was a veteran of the United States Air Force and served his country in the Korean War. He was born-again January 6, 1956 in Witchita, KS. He was a member of Euclid Ave. Baptist Church and was a Sunday school teacher. Glen had been the 1st Pastor at East Bristol Baptist Church, Bristol, VA and Pastor at Free Hill Southern Baptist Church, Nickelsville, VA. He and his wife were a tractor trailer team for 18 years and drove the TRAC Ministry for Christ to all 48 states and Mexico. Since his retirement he has served as Pulpit Supply at several churches and at the Haven of Rest Rescue Mission. His hobbies included his church work and reading the Bible. Glen is survived by his wife, Caroline Stophel Murray; two daughters, Robbin Murray Murray and Tammy Murray Ritch and husband Patrick; five grandchildren, Bill Murray, III, Joshua Murray, Jessica Murray Jones and husband Benjamin, Sarah Murray Trent and husband Lucas, and Hannah Ritch; one great grandchild, Dylan Murray; sister Wilma Murray Stinnette; and several nieces and nephews. The family would like to express a special thank you to Jim and Linda Davis, Ray Perrigan, and the many Pastors and friends that visited during Glen's sickness. The family will receive friends from 5:00 until 7:00 p.m. Wednesday, June 19, 2019 at Blevins Funeral & Cremation Services, Bristol, VA. The funeral service will follow at 7:00 p.m. in the funeral home chapel with Dr. Alan Roberts, Pastor and Reverend Bill Thompson officiating. The committal service and interment will be conducted at 11:00 a.m. Thursday, June 20, 2019 at Shipley Cemetery, Bristol, TN. Military honors will be provided by United States Air Force Honor Guard and Chapter 40 of the D.A.V. In lieu of flowers, the family is requesting that donations be made to Samaritans Purse, c/o Euclid Avenue Baptist Church, 900 Euclid Ave., Bristol, VA 24201.

Reverend Glen Murray, 82, of Bristol, TN went to be with the Lord on Sunday, June 16, 2019. He was born in Bristol, TN on August 3, 1936, a son of the late James and Lillie Snader Murray. In addition to his parents, he was preceded in death... View Obituary & Service Information

The family of Reverend Glen Murray created this Life Tributes page to make it easy to share your memories.

Send flowers to the Murray family.