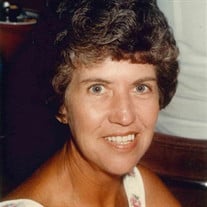 Shirley Yelverton Baggett, 82, of Palm Coast, FL, passed away on Wednesday, July 4, 2018 at her home following a long illness. Shirley was born in Longview, Texas. She was preceded in death by her husband of 60 years, John W. Baggett, her mother, Gertrude Sample and step-father, Milton Sample, her father, William C. Yelverton, a sister, Mary Nell Hall, her mother-in-law, Mae Gray Baggett, a special sister-in-law, Margaret Fulgham, nieces, Evelyn Kitayahma and Janice Sapp and nephews, Kit Kitayahma and Braxton Fulgham. She was raised in Hastings, FL and graduated from Hastings High School in 1953. After marrying John W. Baggett March 4, 1958, they resided in Palatka, FL where she was a member of Peniel Baptist Church and helped Peniel Baptist Academy as a teacher of the two year olds until 1980. She and John were members of the over 50’s dance Club and Putnam Bowling League. In 1998 they moved to Bristol, Tennessee where she was involved with the Bristol White Sox Minor League, Seniors Bowling Association and was a member of the First Free-Will Baptist Church of Bristol and the First Free Will Seniors Group. Shirley was a devoted and loving wife, loving mother, grandmother and friend. Those who were blessed to know her loved her. She will be missed by all. Shirley is survived by her daughters, Lori Porter of Palm Coast, FL and Lynn Bowers of Bristol, TN, grandchildren, Ryan Porter of Jacksonville, FL, Brianne Martin of Deland, FL Jayme Porter of Palm Coast and Callie Rogers of Bristol, TN, great-grandkids, Leah E. Dolin and Paisley Dolin, special sister-in-law, JoAnn Baggett of St. Augustine, FL, Bryan Porter of Palatka, FL and numerous nieces, nephews, great-nieces and great-nephews. Graveside services will be private Sunday, July 8, 2018. In lieu of flowers, the family is requesting that donations be sent to Stuart F. Meyer Hospice House, 150 Memorial Medical Parkway, Palm Coast, FL 32164.

Shirley Yelverton Baggett, 82, of Palm Coast, FL, passed away on Wednesday, July 4, 2018 at her home following a long illness. Shirley was born in Longview, Texas. She was preceded in death by her husband of 60 years, John W. Baggett, her mother,... View Obituary & Service Information

The family of Shirley Y. Baggett created this Life Tributes page to make it easy to share your memories.

Send flowers to the Baggett family.