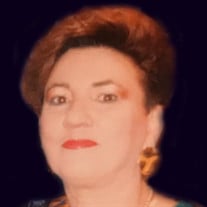 Beloved mother and grandmother, Shirley Ann Turpin, 77, of Bristol, Tennessee passed peacefully, after a short hospital stay, on Friday, September 8, 2017 in Wellmont Bristol Regional Medical Center, Bristol, Tennessee. She was born in Hamlin, VA on March 31, 1940, a daughter of the late Pack and Nannie Ruth Horne Ramsey. In addition to her parents, she was preceded in death by one sister, Joyce Ramsey; and one brother, William Ramsey. She was a strong woman and a trailblazer, raising two daughters while also juggling a successful career as a comptroller. She had an artist's eye and treated our home like it was her canvas. She was genuinely curious about others and easily made conversation with anyone she met. Shirley is survived by two daughters, Lisa Turpin of Arlington, Virginia and Bambi Barnes of Silver Spring, Maryland; two brothers, Grant Ramsey of Baltimore, Maryland and Paul Ramsey of Columbus, Ohio; four grandchildren, two great grandchildren, and several nieces and nephews. The family would like to express a special thank you to the staff at Wellmont BRMC for their kindness and generosity shown to Mom during her illness. The family will receive friends from 3:00 p.m. until 5:00 p.m. Thursday, September 14, 2017 at Blevins Funeral & Cremation Services. A Celebration of Life Service will follow at 5:00 p.m. Thursday at Blevins Funeral & Cremation Services. In lieu of flowers, the family is requesting that donations be made to Wellmont Foundation, P.O. Box 1069, Kingsport, TN 37662. Condolences for the family may be sent and viewed by visiting www.BlevinsCares.com. Mrs. Turpin and her family are in the care of Blevins Funeral & Cremation Services.(276) 669-6141.

The family of Shirley Ann Turpin created this Life Tributes page to make it easy to share your memories.

Send flowers to the Turpin family.