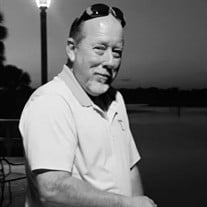 Steven "Steve" Wayne Worley, 59, of Bristol, VA passed away on Tuesday, April 6th, 2021 in the Bristol Regional Medical Center, Bristol, TN following a brief illness. He was born in Washington D.C. on April 13th, 1961. He was preceded in death by his father, Charles Allen Worley Sr. Steve was a devoted and loving husband, son, father, and papaw. He was of the Christian faith attending GracePoint Fellowship, Kingsport, TN. Steve was an avid outdoorsman and enjoyed spending his time in the great outdoors. Steve was also a skilled contractor and was highly respected by those he served and the tradesmen he worked alongside. Steve owned and operated Fresh Look Home Remodeling and Repairs for most of his life. Steve is survived by his loving wife of 17 years, Janet Ann Marshall Worley; his mother, Peggy Jean Epperson Worley of Bristol, TN; three sons, Michael Worley and wife Haley of Johnson City, TN, Cody Anderson and wife Jillian of Kingsport, TN and Bradley Parris and his significant other Adam Badger of Bristol, VA; one brother, Allen Worley of Bristol, TN; two sisters, (twin) Sandra Madison of Bristol, TN and Rhonda Worley of Bristol, TN; four grandchildren, Rylen Worley, Hudson Worley, Wyatt Worley and Gibson Anderson and several nieces and nephews. The family would like to express a special thank you to the staff at Bristol Regional Medical Center's ICU #3 for all the love and care shown to Steve during the past few weeks. "I have fought a good fight, I have finished my course, I have kept the faith: Henceforth there is laid up for me a crown of righteousness, which the Lord, the righteous judge, shall give me at that day: and not to me only, but unto all them also that love his appearing," Timothy 2:47. Per his wishes, there are no services planned at this time. In lieu of flowers, the family is requesting that donations be made out to St. Jude Children's Research Hospital, 501 St. Jude Place Memphis, TN 38105, www.stjude.org/donate. Condolences for the family may be sent and viewed by visiting www.BlevinsCares.com. Mr. Worley and his family are in the care of Blevins Funeral & Cremation Services, 417 Lee St., Bristol, VA 24201; ph.#: (276) 669-6141.

Steven "Steve" Wayne Worley, 59, of Bristol, VA passed away on Tuesday, April 6th, 2021 in the Bristol Regional Medical Center, Bristol, TN following a brief illness. He was born in Washington D.C. on April 13th, 1961. He was preceded in death... View Obituary & Service Information

The family of Steven Wayne Worley created this Life Tributes page to make it easy to share your memories.

Steven &quot;Steve&quot; Wayne Worley, 59, of Bristol, VA passed away on...

Send flowers to the Worley family.