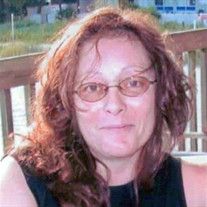 Terry L. Whitley, 55, of Bristol, Virginia passed away on Thursday, January 30, 2020 at her home in Bristol, VA. She was born in Bristol, VA on July 6, 1964, a daughter of the late Bob Roberts. In addition to her father, she was preceded in death by one daughter, Jessica L. Whitley; one nephew, Timothy Parks; one son-in-law, Ethan Paxton; father-in-law, Thomas Whitley, Jr.; and mother-in-law, Gladys M. Whitley. Terry was a resident of Bristol for all of her life. She was a loving and devoted daughter, sister, wife, mother and grandmother. She was formerly employed by the Exide Corporation and also worked as a CNA at NHC Healthcare in Bristol for several years. She loved working with ceramics and other crafts. She enjoyed going on motorcycle rides with Ray and traveling around all of the area. She had attended Grace Baptist Church, Bristol, VA. Terry is survived by her loving husband of 38 years, Ray Whitley; one daughter, Bobbie Sue Paxton; one son, Johnny Ray Whitley; four grandchildren, Autumn, Kiersten, Elijah and Andrea Paxton; mother, Vivian Roberts Kendrick; three sisters, Teresa Smith, Lisa Parks and Kathy Rosenbalm; Terry's twin brother, Gary Roberts; several cousins, nieces and nephews; and honorary grandchildren. The family will receive friends from 6:00 p.m. until 8:00 p.m., Friday, February 7, 2020 at Blevins Funeral & Cremation Services, 417 Lee St., Bristol, VA 24201. Funeral Services will be conducted at 8:00 p.m. after the visitation with Rev. Randall Shaffer officiating. Committal Services and Interment will be conducted at 2:00 p.m., Saturday, February 8, 2020 in Mountain View Cemetery, Bristol, VA. Pallbearers will be Johnny Ray Whitley, Timothy Wright, Jesse Spangler, Cody Moore, Mike Cannon and Ace White. Honorary Pallbearers will be Bill Slagle and Jeff Smith. Those who wish to attend the graveside service are asked to meet at the funeral home chapel on Saturday at 1:15 p.m. to go in procession to the cemetery. Condolences for the family may be sent and viewed by visiting www.BlevinsCares.com. Mrs. Whitley and her family are in the care of Blevins Funeral & Cremation Services.(276) 669-6141.

Terry L. Whitley, 55, of Bristol, Virginia passed away on Thursday, January 30, 2020 at her home in Bristol, VA. She was born in Bristol, VA on July 6, 1964, a daughter of the late Bob Roberts. In addition to her father, she was preceded in... View Obituary & Service Information

The family of Terry L. Whitley created this Life Tributes page to make it easy to share your memories.

Terry L. Whitley, 55, of Bristol, Virginia passed away on Thursday,...

Send flowers to the Whitley family.