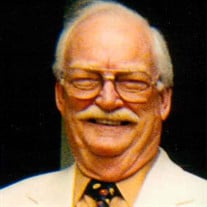 Tom Ferrell, 88, died Thursday, June 8, 2017 at NHC of Bristol following a lengthy illness. Born in Dothan, AL, Tom was preceded in death by his parents, Mattie Lou and L.T. Ferrell and a brother, Robert L. Ferrell of Bristol, VA. Tom spent 20 years in the United States Air Force with duty stations in Japan, Thailand, North Africa, Korea, and Turkey followed by a second career as a data analyst at Tracey Defense Depot California. Tom was a avid touring motorcycle rider and advocate for local law enforcement. He was known to those friends as "Sgt. TopKat". He is survived by a daughter, Dorothy Ferrell of California and two nephews, John S. Ferrell of Tucson, AZ and Mike Ferrell of Abingdon, VA and their families. The family would like to extend a very special thank you to the staff at NHC of Bristol, beloved friends, Sue and Dick Jones, and his dedicated and loyal caregiver, Jill Mumpower. The family will receive friends from 1:00 until 2:00 p.m. on Saturday, June 17, 2017 at Blevins Funeral & Cremation Services, 417 Lee St., Bristol, VA. The funeral service will follow at 2:00 p.m. at the funeral home. The committal service and interment will follow at Mountain View Cemetery, Bristol, VA. Military Rites will be conducted by "Chapter 40 of the D.A.V." Bristol, VA and the United States Air Force Honor Team, Shaw Air Force Base, SC. Condolences for the family may be sent and viewed by visiting www.BlevinsCares.com or condolences may be mailed to: 328 Mockingbird Rd., Bristol, TN 37620. Mr. Ferrell and his family are in the care of Blevins Funeral & Cremation Services. (276) 669-6141.

The family of Thomas Freeman Ferrell created this Life Tributes page to make it easy to share your memories.

Send flowers to the Ferrell family.