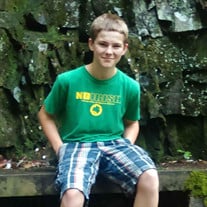 Thomas Michael-David Trent, age 14, of Bluff City, TN passed away Tuesday, September 20, 2016 at Niswonger Children's Hospital, Johnson City, TN. He was born in Johnson City, TN on March 24, 2002. He was preceded in death by his mother, Melissa Sue Church Trent. He always cared for others before himself and cared deeply for his brothers and sisters. He was very close to his father. He was a talented artist. He enjoyed hunting and fishing and being in the outdoors. Thomas is survived by his parents, Jeremy Michael Trent and wife Melissa Nicole Trent of Bluff City, TN; two brothers, Caleb McCarty and Jeremiah Trent; and one sister, Aleesia Trent; grandparents, Edwin and Tammy McCarty and Michael and Linda Trent; grandmother, Maxine Osborne; great grandparents, Elmer and Sharon Morgan; aunts, Sasha Rosenbalm and husband, Joey and Katie Gibson and husband Breck; uncle, Joshua Trent and wife Angel. The family will receive friends from 4:00 until 6:00 p.m. Monday, September 26, 2016 at Highlands Fellowship Church, Bristol Campus Exit 5, 2004 Lee Hwy., Bristol, VA. The Celebration of Life Service will follow at 6:00 p.m. with Gary Childers officiating. In lieu of flowers, the family is requesting that donations be sent to Niswonger Children's Hospital, 400 N. State of Franklin, Johnson City, TN 37604. Thomas Michael-David Trent and his family are in the care of Blevins Funeral & Cremation Services. (276) 669-6141.

The family of Thomas Michael-David Trent created this Life Tributes page to make it easy to share your memories.

Send flowers to the Trent family.