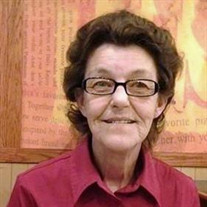 Vivian Louise Sanders, 68, of Bristol, Virginia passed away Sunday, April 26, 2020 at her residence. She was born on April 26, 1952. She was preceded in death by her loving husband Richard C. Sanders, Sr.; mother, Nina Hilliard; father, Jess Hilliard; and brother, William (Bill) Hilliard. Vivian is survived by her oldest son and daughter in-law, Richard C Sanders Jr. and Amanda Sanders, son, Eric Sanders; and daughter, Karen Sanders. Followed by grand-daughter Rachel Green and husband, Cody Green and great grand-daughters, Allie-May Green, Gracelan Green, and Kynzlee Green, Grand-daughter, Kelly Sanders and great grand-son Colson Keeling, and grand-daughters, Angel Zvara, Shelby Zvara, and grand-son Toby Zvara. She also leaves behind two brothers, David Hilliard and Jerry Hilliard and wife, Christy; and one sister, Patty Vestal and husband, Howard. Along with several nieces and nephews that she loved and tried to raised as her own. Vivian worked as a Head Start Aide and Bus Driver at the Upper East TN Human Development Agency. She was a faithful Christian woman who loved the Lord with all of her heart. Although she left her beloved ones behind, we're not fearful for where her soul is rejoicing. She will be greatly missed by so many. Until we meet again. This is not goodbye. This is, we will see you later. Your Loving Family. Due to the current COVID-19 regulations, Private Services will be held for the immediate family only. On behalf of the family, and during these unprecedented times, continue to support the family through their loss by sending cards, making phone calls, or placing on-line condolences at www.BlevinsCares.com. Condolences for the family may be sent and viewed by visiting www.BlevinsCares.com. Mrs. Sanders and her family are in the care of Blevins Funeral & Cremation Services, phone: (276) 669-6141.

Vivian Louise Sanders, 68, of Bristol, Virginia passed away Sunday, April 26, 2020 at her residence. She was born on April 26, 1952. She was preceded in death by her loving husband Richard C. Sanders, Sr.; mother, Nina Hilliard; father, Jess... View Obituary & Service Information

The family of Vivian Louise Sanders created this Life Tributes page to make it easy to share your memories.

Send flowers to the Sanders family.