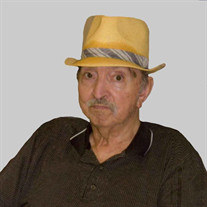 Warren "Butch" Andrew Fleenor, 81, of Bristol, VA passed away Friday, October 16, 2020 at Johnston Memorial Hospital, Abingdon, VA. He was born in Bristol, TN on March 27, 1939, a son of the late Arman Preston and Cynthia Ruby Wyatt Fleenor. Butch was a loving and devoted husband, father, cousin and friend. He was a veteran having served in the Marines as a Lance Corporal during the Cuban Missile Crisis. Prior to joining the Marines, Butch was a Golden Gloves amateur boxer and he continued to shadowbox throughout the rest of his life. During his deployment, Butch was stationed at Key West and Guantanamo Bay maintaining hot pads and traveling back and forth by PT boats in the effort to deter the Russians. He and his partner spent many hot days dug into the beaches, and it was at this time where he developed a love for the sun. After being discharged from the Marines, Butch worked for several different companies in the immediate Tri-Cities area but finally ending his career as a machinist at KMAC. Warren is survived by his loving wife of 50 years, Shirley Ann Fleenor; one son, Terry Allen Fleenor of Bristol, VA; and cousin, Bobby Alvis and wife Carlene of Bristol, VA. The family would like to express a special thank you to the administrative and nursing staff at Grace Healthcare for all the love and care shown to Warren the past few years. A private family burial was held at Mountain View Cemetery, Bristol, VA. In lieu of flowers, the family is requesting that donations be made to the Disabled American Veterans, Chapter 39, 630 Cardin Hollow Rd. Bristol, TN 37620. Condolences for the family may be sent and viewed by visiting www.BlevinsCares.com. Mr. Fleenor and his family are in the care of Blevins Funeral & Cremation Services, 417 Lee Street Bristol, VA 24201 ph #: (276) 669-6141.

The family of Warren "Butch"' Andrew Fleenor created this Life Tributes page to make it easy to share your memories.

Send flowers to the Fleenor family.