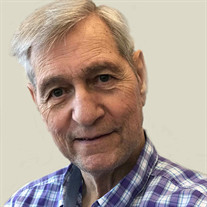 William “Bill” Ellis Dalton, Jr., passed away on Sunday, May 27, 2018 surrounded by his family. Born in Danville, VA, August 30, 1944, he was the son of the late William Ellis and Doris Snow Dalton. He was also preceded in death by his brother, Raymond S. Dalton. He graduated from Randolph Henry High School (Charlotte Court House, VA) in 1963, where he earned All-State football honors his junior and senior years. From there, he moved to Nashville, TN to attend Gupton-Jones Mortuary College. After graduating, he worked for Bliley’s Funeral Services in Richmond, VA for a number of years. Additionally, he served our country in the U.S. Army. For more than 30 years he worked for Overnite Transportation/UPS Freight in most every capacity possible. During his more than 40 years in Bristol (Washington County, Virginia), he influenced many young lives serving as a football, baseball, and basketball coach while his children attended elementary school. He was a member of the American Legion, Post 0145, Bristol, TN. After retiring, Bill made many friends playing pickleball--he was an avid, top-notch player. Being a music lover, retirement gave him more time for playing guitar. He also enjoyed watching old western movies. He loved being outdoors, especially when riding his motorcycle. As a student of politics, he thoroughly enjoyed political bantering. Bill was always one to lend a helping hand when anyone needed one. Everyone, who knew or met Bill, was taken with his kindness, humbleness, and generosity. The world is a better place because of Bill--he was a good soul. Bill is survived by his wife of 29 years, Gail Shelton Dalton; two daughters, Tracey Dalton Mercier and husband, Greg of Bristol, VA and Becky A. Moore and husband, K.D. of Bristol, TN; one son, William E. Dalton, III and wife, Beth of Bristol, VA; one step-son Joshua G. Robinson of Atlanta, GA; six grandchildren; one sister, Bonnie Dalton Williamson of Midlothian, VA; special friend Art Jackson of Bristol, TN; and several nieces and nephews. A service celebrating his life will be held on Saturday, June 9, at 2 o’clock at Fellowship Chapel, 201 Crockett St., Bristol, VA. In lieu of flowers the family requests that donations be made to the Leukemia-Lymphoma Society at donate.lls.org in memory of Bill.

The family of William "Bill" Ellis Dalton Jr. created this Life Tributes page to make it easy to share your memories.

William “Bill” Ellis Dalton, Jr., passed away on Sunday, May...

Send flowers to the Dalton family.