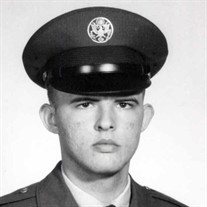 William P. "Bill" Goad, Jr., 73, of Bristol, VA passed away on Thursday, August 12, 2021 at Bristol Regional Medical Center, Bristol, TN. He was born in Smyth County, VA on August 26, 1947, a son of the late William and Elsie Goad. He had lived in Bristol, VA most of his life and was a veteran of the U.S. Air Force serving during the Vietnam Era. He was a retired salesman from Kerns Bakery. Bill is survived by his loving wife of 55 years, Dorothy A. Goad; one daughter, Anna Brown and her husband, Mike; one son, Ben Goad and his wife, Candy; six grandchildren, Ashley Jones and her husband, Jacob, Brittany Brown, Lindsay Brown, Ben Goad II, Aundrea Jones, and Scott Thomas; three great grandchildren, Isabella Brown, Rhylan Jones, and Brayden Jones; one sister, Barbara Vincill and her husband, Jerry; one brother, Dwight Goad and his wife, Sharon; and several nieces and nephews. A private graveside service for the family will be conducted at Mountain View Cemetery with Pastor Mark Gaminde officiating. Military rites will be conducted by the U.S. Air Force Honor Guard and D.A.V. Veterans Honor Guard. Condolences for the family may be sent and viewed by visiting www.BlevinsCares.com. Mr. Goad and his family are in the care of Blevins Funeral & Cremation Services.(276) 669-6141.

The family of William P. "Bill" Goad Jr. created this Life Tributes page to make it easy to share your memories.

Send flowers to the Goad family.