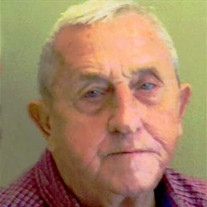 William "Bill" Griffin, 76, of Bristol, Virginia passed away Saturday, March 7, 2015 at Wellmont Hospice House in Bristol, TN. He was born in Sugar Grove, VA on February 8, 1939, a son of the late Claude and Margaret Hutton Griffin. Bill was retired from Bristol, Virginia Public Works after 30 years of service. His favorite pass times have always been auction sales and old cars. William is survived by his wife of 45 years, Mary Griffin; son, Billy Griffin and his girlfriend, Cheryl Salser; daughter, Angela Rash and husband Will; two grandchildren, Timothy Griffin and Breanna Rash; three adopted grandchildren, Logan, Ashton, and Holden; one brother, Charles Griffin; four sisters, Vivian Love, Marie Sherfey, Lois Powers, and Ann Boyle; and several nieces and nephews. The family would like to extend a special thank you to the staff at NHC in Bristol, VA and to Wellmont Hospice House for their kindness to Bill. The family will receive friends from 1:00 pm until 2:00 pm on Tuesday, March 10, 2015 at Blevins Funeral & Cremation Services, 417 Lee St., Bristol, VA. The funeral service will follow at 2:00 pm in the funeral home chapel with Pastor Paul Mays officiating. The committal service and interment will follow at Mountain View Cemetery in Bristol, VA. Pallbearers will be family and friends. In lieu of flowers, the family is requesting that donations be sent to Shriners Hospital for Children-Cincinnati, 3229 Burnet Ave., Cincinnati, OH 45229-3095.

The family of William "Bill" Griffin created this Life Tributes page to make it easy to share your memories.

Send flowers to the Griffin family.